Home About Us Saint George

Saint George is perhaps most famous for slaying a dragon. The most widely known version of the story was written by Richard Johnson way back in 1596. It’s titled ‘The Seven Champions’ and tells of a young St. George who is kidnapped by a witch and later sails to foreign lands to rescue a princess. 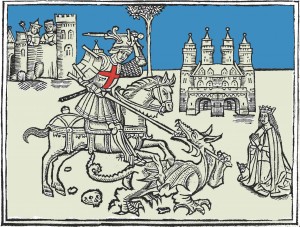 We have a fully illustrated children’s book about St. George and the Dragon that you can download (.pdf format, 2690kb). It’s based on The Seven Champions and ideal to read to your kids the night before 23 April.

As for the real St. George, some commentators have been sceptical in the past about whether he existed. But recent evidence has persuaded some scholars to conclude he was real. Here’s what we believe to be true:

St. George is possibly England’s most successful immigrant. Born in a foreign land, welcomed by the English and has worked hard for over 800 years in his adopted country. He has integrated so well that he has come to symbolise the very essence of ‘Englishness’.

The story of St. George and the Dragon dates back to the Middle Ages when the dragon was commonly used to represent evil, so it’s an excellent tale of good triumphing over evil.

Since then St. George has been popularly identified with English ideals of charity, chivalry and courage (now known as the 3 C’s).

He is not only patron saint of England but also of…